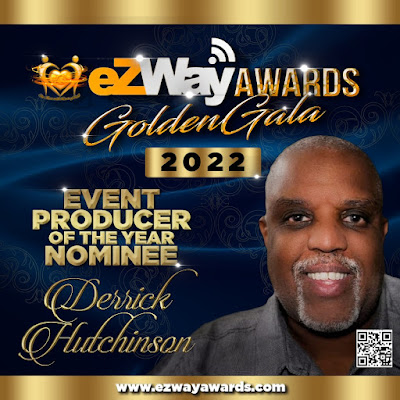 The picture is of guest Derrick Hutchinson who will be appearing on Season Seventeen, Episode One of TAP Interviews Web, TV Show Series!

This will be a live stream event, being recorded & going live on Facebook, YouTube & eZWay TV. We will be Interviewing Derrick about his current eZWay Award Nomination. It will be streamed live @ 8:30 am (PST/USA) time on Thursday 11/17/2022. Watch live on Facebook Platform, as well as YouTube Platform, & eZWay TV.

Derrick Hutchinson, Born in Kansas City Mo. Came to Los Angeles as small boy with his mom who had aspirations of making it big Hollywood. Her efforts landed her and Derrick in many dance classes where she hoped to turn her dream into a career in dancing. Ultimately she would end up a successful dance teacher, choreographer and show producer. Derrick was no stranger to watching hard work and focus pay off. He also spent years watching his mother and grandmother sit in the kitchen with a pen and paper. That pen and paper would end up being show in Hollywood called “Capers With Class and Bare Touch of Vegas” A Vegas Variety show the they produced and presented here in Hollywood. Armed with that inspiration and reinforced with the desire to be successful, Derrick and his friends formed a dance team. Their efforts would lead them to opening for large “A” list music groups in the 80’s like the Whispers and Brass Construction. Eventually Derrick’s group would disband in search of corporate careers. But Derrick still had the entertainment bug so he became a DJ. He would go on to DJ he was through college where he was a computer science major. Still a young man he created DRH Computer Consulting Group. Where he stayed has CEO for 30 years, Known for being the ultimate “One Stop Shop” DRH Computer Consulting Group had large corporate clients like Singapore Airlines, Metro PCS, Robert Shepiro ESQ (OJ’s Law Firm), Celebrity clients like Todd Bridges, OJ Simpson, Pointer Sisters, Crescendo Ward(Choreographer with Paula Abul and creator of the LA Street Dance Competition) and many more.

After many years in corporate America and working with tons of celebrities as their computer consultant Derrick was approached to create a website for a rims and tire company in Hawthorne, CA. That client asked for models for their website. Derrick would enlist the help a friend of his daughter and Anerrick Management Group was born. Now arm armed with years of experience in Entertainment, negotiation, Business and creativity Derrick would again create a One Stop Shop, this time for models. Quickly one model turned into ten and ten turned in forty. Derrick quickly became known for the go to person to get model by all of the fashion show producers in town. After years of making contacts, building his brand and learning the entertainment business inside and out. Derrick took a shot at producing his own show in 2008. It was a success! Derrick would then meet Bobbie Bell who was one of the best model coaches in town. He would then create the Media Extreme Team and the trifecta was complete the Ultimate One Stop Shop! AGAIN! Anerrick Management Group Manages models and other talented people, Anerrick Productions produces LA Fashion Week Shows such as Glamour and Style and LA Runway. It as produces tv’s, infomercials and more. The Media Extreme Team Shoots anything that requires a lens, Products, Music Videos, Photoshoots, portfolios, EPK’s, Head shots, Fashion, Sports, events, Red carpets and scheduled to shoot their fir film soon. The Media Extreme Team is also the place for multi cam live streaming and on the scene news reporting.

If all that wasn’t enough Derrick produces a tv show the air on Roku TV via the EZwaywork called Fashionz Corner. The show profile fashion designers and their journey into the business. Derrick is the Program Direct for EZway TV where he is responsible for the programing you see on the EZway TV Network. As if that wasn’t enough Derrick is also “Head Of Production” for Famecast Studios where he is in charge video and photo production for their Celebrity client base. Recently Derrick was nominated for the ”Event Producer of the Year Award” by Ezway Broadcasting. So it’s easy to see, If you need to model it, Shoot it, Film it, produce it or edit it. Derrick is the one to call.

I'll keep you updated on this shows live stream events, via this blog. You may also fill out the following Web Form, for further Info, event notifications, plus Interview & show scheduling, on TAP Interviews or The Artist's Process original show.

If you would like to get in touch with me, please use the following web-page!

I'd love to hear from you!

Please also be sure to check out my blog page.

In addition you can click on the following links to find out more about "TAP Interviews" Web, TV Show Series!

Furthermore, you can create a profile for free & connect with me as well as other Influential people here!

Finally, here's how you can Advertise with Us.